Hi, hello & welcome to America’s favorite column about America’s favorite sport! Though it’s probably not a favorite of people using it to bet on games these days. Last week was the worst since I’ve been doing this, as I only got three games right. I had been working my way back towards .500, but now it’s going to take a miracle to get on the smiling side of the scoreboard for the 2017 season.

I haven’t talked to Dustin James about my future here, but sources tell me he’s been working on his Vince McMahon impression. Until then, here’s the fantasy & the gambling! But first, the national anthem.

This one’s pretty self explanatory. Booker T was doing the Fave 5 gimmick back when the Ocho was starting up, so we figured it only made sense to make it part of our fantasy football podcast over at offtheteam.com. These are five guys that are going to have tremendous weeks and lead your team to fantasy glory. And maybe even lead their actual team to glory, but we’re not worried about that too much here.

Marshawn Lynch: If there’s a game that Beast Mode is going to be ready for, it’s this one. The New England Patriots are everybody’s Super Bowl, and Lynch didn’t get to end his last Super Bowl meeting with them the way he would have liked. His best work was just before Oakland’s bye & the Patriots defense has been sketchy at best, so expect a big game & lots of Skittles this week.

Alex Smith: The New York Giants have given up more points to quarterbacks than any other team. They aren’t playing for anything. The Chiefs are coming off of a bye, and Alex Smith Man will be ready to deliver the goods. He hasn’t gone below 15 points all season, and he’ll probably double it this week.

Alshon Jeffery: The Eagles WR had two of his best games of the season heading into the bye, going for 14 & 20 points against San Francisco & Denver. Expect that positive momentum to continue against the Dallas Cowboys, a team that’s given up the 9th most points to WRs this season. Carson Wentz will be doing his thing, and he & Jeffery are getting on the same page.

Austin Hooper: Hooper’s a streaky character that’s TD-dependent, but with the tight end rankings being what they are you’ll take him on your team any day. The Seattle Seahawks have allowed quite a bit of TE production lately, they’ve given up 60+ yards to TEs in 4 out of the last 5 games. You’ll take that and like it, especially if Hooper can add another six in the end zone. 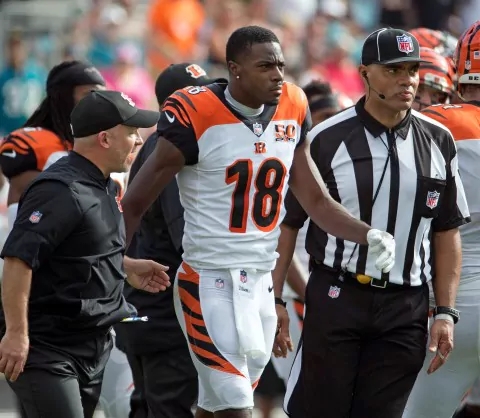 These are four people that you’re probably going to have to start, but you’re not going to be very happy about it. I could stick most of the people I drafted on multiple teams on this list.

A.J. Green: A.J. came back strong after his troubles in Jacksonville, but he still got out-targeted in Tennessee by Brandon LaFell. Things are off-kilter with the Bengal offense, and going to Denver probably won’t make things much better. The Bronco D has looked silly lately, but that was against teams like Philadelphia & New England that are actually competent. #18’s going to have a rough day, I’m thinking.

Dak Prescott: The Eagles defense has really clamped down lately, and Dak’s in the unenviable position of not really having a running game that’ll take the pressure off. We’d all like Alfred Morris, Darren McFadden or somebody to emerge as the temporary Ezekiel Elliott, but none of them seem able to take that title. As long as they don’t, the pressure & attention will be on Dak.

Leonard Fournette: The Jaguars RB didn’t get a whole lot done against the LA Clippers last week, and the Cleveland Browns are actually pretty solid against the run. Maybe Fournette ends that statistic, but the Jags have proven that they can beat meh teams without him.

Tevin Coleman: We’ve called Coleman The Wrong Falcon RB for a long time on the podcast. He might be the right one at the moment with Devonta Freeman out of commission, but either guy would be wrong to utilize against the Seattle Seahawks. Richard Sherman going down could make things difficult for the Seattle D, but not against the run.

A lot of the fantasy experts out there love to give you their sleeper picks. It’s not a bad idea. The flaw in the execution is they’re typically not highlighting people you can pick up.

So what we’ve been doing on the Ocho for the past five seasons is highlighting some sleepers that are actually Off The Team. They’re owned in less than 50% of Yahoo leagues, just sitting on the wire waiting for you to pick them up.

C.J. Fiedorowicz (13%): You may have noticed by now that the tight end position is a bit of a wasteland. C.J. finally came back from a concussion last week and only managed to get two catches for ten yards against the Rams. That isn’t great, but Will Fuller is hurt, the Texans are playing the Cardinals, and somebody has to get some attention from the immortal Tom Savage. SO YOU’RE TELLING ME THERE’S A CHANCE?

Austin Ekeler (5%): Ekeler was getting all the fourth quarter carries for the Chargers while they were trying to salt away the clock. He also caught two passes for touchdowns. The Chargers do this from time to time. Some random dude like Darren Sproles or Branden Oliver all of a sudden becomes a thing towards the end of the season and carries you to fantasy glory if you’re quick enough to hop on it. Is this the year of Austin Ekeler? Time will tell.

Dontrelle Inman (2%): You might recall that the Bears acquired Inman’s services just before the trade deadline. We wondered if it would matter or not. Of course it would, everything matters in the NFL! Inman has quickly become the Bears’ top WR option because who else would be, and they’re letting Mitchell Tribusky throw the ball once they’re out of games. That should happen pretty often going forward, so keep an eye on this situation.

Would you believe I’ve never watched this music video before putting this column together? I haven’t been giving Miley nearly enough credit.

Picks Against The Spread

Tennessee at Pittsburgh (-7): I wasn’t very impressed with the Titans on Sunday. The Steelers usually perform well on Thursday night even if they don’t wanna be there.

Detroit (-3) at Chicago: What the heck was I thinking last week picking the Bears to do something? I really have no idea what I’m doing this season.

Kansas City (-10.5) at NY Giants: Andy Reid-coached teams are 16-2 coming off of a bye week. I like their chances against a Giants team playing for draft position.

Tampa Bay at Miami (-2.5): Remember when these two teams were supposed to play in Week 1 and there was a chance that the Buccaneers would be good? Ah, memories. I’m just happy we’re getting a week without the Dolphins in prime time.

Baltimore (-2) at Green Bay: I think the Ravens are decent. Maybe. I’m not really sure, and I’ve seen way too many of their games. They should at least be good enough to out-point Brett Hundley.

LA Rams at Minnesota (-2.5): The big talking point this week in Cincinnati is how Andrew Whitworth making the move to the Rams made that team good & the Bengals bad. I think there’s more to both situations than just that, but it’s hard to argue the point that he’s helped the Rams grow up & the Bengals don’t know their ass from a hole in a ground without his leadership & grit.

Arizona (-1.5) at Houston: Old people benefit from extra time off. The Cardinals played on Thursday last week, so they have a couple of extra days to recover & be ready for a Texans team that is just downright sorry & no-account without Deshaun Watson.

Jacksonville (-7.5) at Cleveland: It would be a Jagsy thing to screw up their positive momentum with a loss to the Browns, wouldn’t it? Let’s hope they’ve got their heads in the game.

Washington at New Orleans (-8): Don’t look now, but the Saints seem like a legitimate contender to be this year’s Random NFC South Team That Loses In The Super Bowl. The running game with Mark Ingram & Alvin Kamara has never looked better, and it’s keeping Old Man Brees fresh for when he’ll actually have to do something. It’s not great for Brees’ fantasy owners, but it works for everybody else.

Buffalo at LA Chargers (-4): Check on Philip Rivers’ status. If he’s playing, take the Chargers. If not, take the Bills.

Cincinnati at Denver (-2.5): Two teams I want no part of…but it’s the Bengals, man. As low as things have gotten in Denver, they can’t lose to the Bengals, right? Right?

New England (-6.5) at Oakland: I thought the Patriots were on a bye last week because I couldn’t remember what they did. Then I remembered they beat the Broncos 41-16 and I didn’t bother watching it because why would anybody?