Week ten is here everyone. Did you miss anything?

WELL YOU’RE IN LUCK BECAUSE I DIDN’T!

As always, we have the most impressive teams, the most disappointing teams, the coaches that should be fired, the best players of the week and a LITTLE SURPRISE AT THE END!!!!

Most Impressive Teams Of The Week

New Orleans Saints: I don’t know what to say about the Saints at this point. Every week people keep saying the same thing. “The Saints are frauds and this is the week they will be exposed” and every week the Saints come out and not only win, but win in impressive fashion. This was supposed to be a tough game against Buffalo this weekend, but the Saints made it look easy. Good luck stopping this offense folks. The Saints are rolling right now on every aspect and they looked damn good once again this week. I know I don’t need to remind people that this was my extremely dark horse Super Bowl pick, but I will continue to do just that as long as the Saints keep winning football games and crushing opponents. The Bills never had a chance in this one.

Green Bay Packers: Even without Aaron Rodgers, the Green Bay Packers were able to get a win over their division rival Chicago on-the-road. The Packers are going to sneak into the playoffs with Brett Hundley and Aaron Rodgers is going to make a miraculous comeback to lead the Packers to the Super Bowl. Don’t say I didn’t warn you when it happens in two months.

Minnesota Vikings: It seems like everyone and their mothers are already crowning the Philadelphia Eagles as NFC Champions. Ummm. am I the only one who thinks everyone is forgetting about a little team up in Minnesota who has played some pretty damn good football over the last couple of years? The Vikings are one of those teams that no one talks about, but they are a scary good team that will win a playoff game or two this season. Hell, they might even win more than that if things fall in the right place. The NFC is a disaster right now and is up for grabs. The Minnesota Vikings are going to get to the playoffs where Aaron Rodgers will beat them with one good shoulder because that’s what happens to this team. Until then, enjoy the w’s Vikings fans.

Seattle Seahawks: It was a win/loss situation for the Seahawks this week. Yes, they went on-the-road and got a win over their division rival Arizona on Thursday Night Football. Unfortunately for the Seachickens, they lost arguably their best player Richard Sherman when he went down with an injury and trust me when I say….this one is going to hurt. When Sherman is out on the field for the Seahawks, he takes away parts of the field from the offense. Without him, the “Legion of Boom” just became the “Legion of Gloom”. The only thing Seahawks fans can hope for is that someone is able to step up and replace him, but that’s a hell of a lot easier said than done.

Los Angeles Rams: I’m all-in on the Rams y’all. I don’t think the general public realizes just how good the Rams have been this season so far. They are 4-0 on the road. They are riding a four-game win streak and no one has been able to score more than 17 points on their defense since Dallas did so in week four (THAT’S A LOT OF FOUR’S!). Coaching matters in the NFL and the Los Angeles Rams are the perfect example of that. This is a different team than we’ve seen previous years under Jeff Fisher. Sean McVay is the NFL Coach of the Year up to this point and the Rams are just another reason people need to slow their roles when they crown the Philadelphia Eagles the NFC Champions.

Atlanta Falcons: The Falcons have had a disappointing year so far this season, but they absolutely whooped the Dallas Cowboys this week. After their win over the Chiefs last week, I was fully back on-board with the Cowboys. Welp, it looks like they need Ezekiel Elliott more than anyone thought. The Falcons started out a little slow in this game, but once the second-quarter hit, they started the motor and didn’t stop for gas until they got to their destination. Which was “VICTORY CITY” and was very badly needed as the Falcons try to stay afloat in the NFC playoff race.

San Francisco 49ers: THE 49ERS GOT A WIN MAN!!!!! STOP THE GOD DAMN PRESSES!!!!! Congratulations to everyone in this organization. No one wants to go 0-16, so this was a much-needed win for everyone. Just don’t get used to it.

New England Patriots: Remember back in week one when the Patriots lost to the Chiefs and everyone was starting to throw dirt on the Patriots grave? TAKE THAT GOD DAMN DIRT OFF ASSHOLES BECAUSE THESE GUYS AREN’T DEAD YET!!! The never aging Tom Brady and the best head coach in NFL history continue to win and dominate teams like the Denver Broncos on prime time television. Remember when we were all worried about the Patriots defense? Let’s put those worries to bed for the time being. I know Denver’s offense sucks and is one of the worst in the league, but it’s all about baby steps folks.

Most Disappointing Teams Of The Week

Buffalo Bills: The NFL is a funny game. A few weeks ago, the Bills were 5-2 and people in Buffalo were whispering about a potential playoff return. Now the Bills are on a two-game losing streak and things aren’t going to get better anytime soon. Are we expected to believe the Bills are going to get things turned around when they have to travel cross-country to Los Angeles next weekend and play the Chargers? The very next week after that, they have to travel to Arrowhead Stadium for a tough match-up with the Kansas City Chiefs. The Bills are doomed guys. They are riding a two-game losing streak which is about to double, but hey….it was a fun story while it lasted.

Cleveland Browns: Well Cleveland, it looked like you might be able to sneak out a win this week. You went into Detroit and played an inconsistent Detroit team and HAD THEM ON THE ROPES! And then it happened. That stinking fourth-quarter. The Lions managed to score 14 points and shut you guys out and that was that. Here we are in week ten and the Cleveland Browns are 0-9 with no hope for the future. Hue Jackson might be the first head coach fired this season and really…who would be shocked at this point?

Chicago Bears: Man, you guys can’t even beat the Green Bay Packers with Brett Hundley as QB. That’s just sad. And if that wasn’t sad enough, the Bears head coach John Fox challenged a play in the second half to try to get better field position and he ended up likely taking points off the board with that bonehead move. Bears fans were not happy and had every right to be pissed. If you can’t beat the Packers without Aaron Rodgers, you are a dumpster fire. Plain and simple.

Dallas Cowboys: If you are holding onto any Dallas Cowboys’ stock at this point, I would go ahead and sell it. If this is what we are going to see with Ezekiel Elliott out, it’s not going to be pretty. What has happened to Dallas’ offensive line by the way? They just gave up eight sacks to a Falcons defense that isn’t exactly a pass-rushing juggernaut. Not to mention, Adrian Clayborn got six sacks himself. SIX SACKS BY ADRIAN CLAYBORN! Dallas is 5-4 at this point and I’m just not sure about their playoff hopes. I was all-in after last week’s victory over Kansas City, but this was an ugly loss and one that’s going to be hard to forgive.

New York Giants: The Giants are the biggest disappointment of the NFL season and losing to the San Francisco 49ers was the tip of the iceberg. This is a talented football team that has given up. They don’t like their head coach and they want him out and their play on-the-field is showing that. The question is, do they want Eli Manning out as well and will it happen? The Giants season is over at this point, but this team is going to be fun to watch this off-season. I’m thinking they go ahead and fire Ben McAdoo and let Eli Manning walk as well. What do they hope to gain by keeping both of these guys on board at this point? Sam Darnold to New York sounds pretty good to me.

Players Of The Week

*These are the top fantasy football players of the week 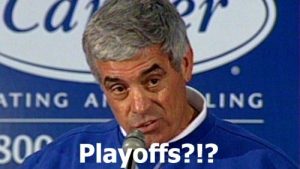 The playoffs are getting close here in the NFL season. As you (should) know, you can’t win a Super Bowl if you don’t make the playoffs. Here’s how the playoff picture is shaping up this week:

AFC Teams That Are In:

NFC Teams That Are In:

AFC Teams Just On The Outside:

NFC Teams Just On The Outside:

AFC Teams That Are Eliminated:

NFC Teams That Are Eliminated: