Here’s the thing. People on Twitter want to tell me that the NBA is America’s new national pastime. They might be onto something. NBA players have never been more petty, and the American people & its leadership have rarely been more petty. The stars are getting bigger & bigger. They actually have stars too, which gives it an advantage over most other sports. The off-season gets more & more buzz every year with guys switching from team to team & contract length getting shorter and shorter. The storylines get more & more dramatic every year.

Could we actually be on the verge of the NFL not being the #1 sports league in America? Is the NBA ready to take the spot?

I see one main problem in this scenario. The kind of people that are tuning out of the NFL right now out of pettiness & spite & good ol fashioned American values aren’t the kind of people that will turn on an NBA game.  I mean, if you think NFL players are far out there with all this social justice stuff, you’re not jumping on board with NBA players, who are far more outspoken on these issues.

Of course, one key reason they can get away with it is because they get more time to talk. NFL players don’t, which is why they express themselves during the Anthem. It’s their only real opportunity to make a statement. NBA players get more time to express themselves other ways, whether it be through the media, or through doing things in the community to try & make things better. Which, let’s be honest, is a far more useful way to spend one’s time than kneeling for a little over a minute.

That being said, I can’t expect Trump America to shift their loyalties from the NFL to the NBA. If Gordon Hayward had stayed healthy for a full game with the Celtics it might have helped.

And now, the playing of the National Anthem.

This one’s pretty self explanatory. Booker T was doing the Fave 5 gimmick back when the Ocho was starting up, so we figured it only made sense to make it part of our fantasy football podcast over at offtheteam.com. These are five guys that are going to have tremendous weeks and lead your team to fantasy glory. And maybe even lead their actual team to glory, but we’re not worried about that too much here.

Dak Prescott: Many of us were worried about a sophomore slump for Dak, but he’s only had one week below twenty fantasy points so far. In Week 1 he got 19. Whoops. He’s been trending upwards ever since, and comes off a bye to face the San Francisco 49ers. The 49ers have allowed more than 300 passing yards to the last three quarterbacks they’ve faced. We’re talking about 56 year old Carson Palmer, Jacoby Brissett & Kirk Cousins here. Not exactly Murderer’s Row. Expect a big week from Dak.

Julio Jones: Jones is typically one of those people I wouldn’t include in this section because he’s too obvious. He’s been pretty average fantasy-wise so far this season though. No touchdowns, one week with triple digit yardage. Not the Julio Jones you’re used to seeing, right? That’ll change this week when the Falcons go to Foxborough to face off with the New England Patriots. The Patriots haven’t stopped anybody from doing anything all season and have given up the most yards to wide receivers. Sunday Night will be Football Night & Get Julio Jones Back on Track Night.

Adrian Peterson: AP drinking from that fountain of youth in Arizona. This week the senior citizen travel group heads across the pond to wacky old England & faces a Rams defense that is completely incapable of stopping the run. I don’t think this renaissance lasts the long haul, but it should be good for a little while longer. I’m really happy the Voodoo Penguin talked me into dropping him last week.

Jimmy Graham: It’s been awhile since Graham has been consistently fantasy relevant, in fact you’d have to go back to his New Orleans days for such a thing. He has 17 catches in his last three games though, as Russell Wilson & he finally seem to be on the same page. They come off a bye this week & face a Giants defense that’s given up the most fantasy points to tight ends this season. Sounds like a good idea to me.

Davante Adams: Times are going to be rough in Green Bay with Aaron Rodgers on the shelf, but Adams might not suffer as much as others. He was still effective in the red zone against Minnesota, and should be again this week against a Saints defense that has been known to give up some yards & points. 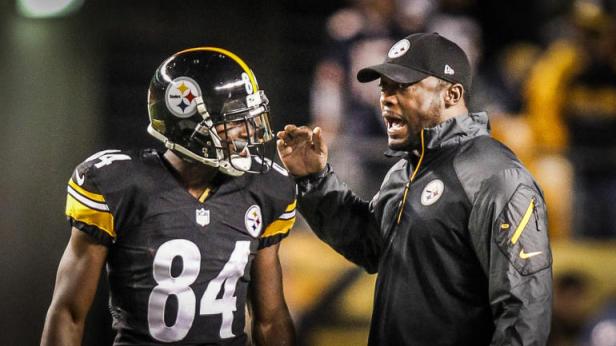 These are four people that you’re probably going to have to start, but you’re not going to be very happy about it. I’ve actually been doing well in this section lately, mostly because offenses have been disappointing thus far.

Jameis Winston: Two main things are going against Famous Jameis this week. He’s got a shoulder injury. He might not practice, but Dirk Koetter seems to think he’ll be cleared to play. The other problem is that he’s playing the Buffalo Bills, who have done a pretty good job against NFL quarterbacks this season. They’ve collected two interceptions in four out of five games this season. That doesn’t bode well for Jameis. Or Ryan Fitzpatrick if the Bucs are stuck doing that with their lives.

Antonio Brown: AB’s a god among men, no doubt. But when he plays the Cincinnati Bengals he’s just a very solid wide receiver. In 13 games against the Bengals he’s averaged 74.8 yards per game and collected four touchdowns. Last season he had games of 58 & 39 yards. I’m not saying that Adam Jones or whoever’s covering Brown is going to shut him out, but don’t expect anything like you saw from him last week.

Keenan Allen: After getting a touchdown in Week 1, Keenan’s been pretty quiet with the exception of 138 yards against Philly in Week 4. The good news is that he was playing his Week 7 opponent, the Denver Broncos, in Week 1. The bad news is he only got 35 yards in that game. I wouldn’t expect a whole lot here.

Buck Allen/Alex Collins: The Ravens RB situation didn’t get any clearer with Terrance West’s injury, and this week they’re heading to Minnesota to take on the Vikings. The Vikings defense has allowed two running backs to get touchdowns so far this season. I don’t see Allen or Collins adding themselves to the list this week. 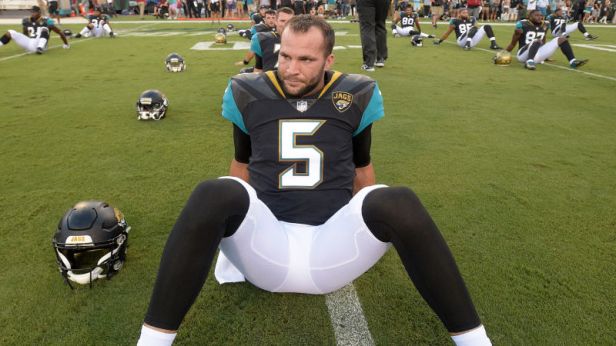 A lot of the fantasy experts out there love to give you their sleeper picks. It’s not a bad idea. The flaw in the execution is they’re typically not highlighting people you can pick up. I saw a column this week suggesting that Eddie Lacy was an intriguing name available on waivers. Yes, Eddie Lacy is available. My dispute is with the “intriguing” part.

So what we’ve been doing on the Ocho for the past five seasons is highlighting some sleepers that are actually Off The Team. They’re owned in less than 50% of Yahoo leagues, just sitting on the wire waiting for you to pick them up.

Blake Bortles (14%): Remember when we thought Bortles was going to be a fantasy thing? That hasn’t really happened. The Jags as a team are heading upwards, but Blake isn’t really a part of it. He could be this week. The Colts don’t really stop anybody & the Jags will likely need to put up a lot of points to keep things close. Keep an eye on Leonard Fournette’s ankle too. If he can’t go, Bortles will have to actually do something this week.

Zay Jones (9%): The Tampa Bay Buccaneers have been absolute trash against the pass this season. They give up over 300 yards per week to wide receivers. The Bills don’t have a whole lot in the way of receivers, but Zay is considered the future of their corps. With Jordan Matthews, Charles Clay and anybody else of note out of commission, Jones will get chances to do things. The Bucs just might let things happen.

New Orleans Defense (6%): The Saints have been on fire since dropping -2 points on New England in Week 2. Last week they got 32 points against Detroit thanks to 5 sacks, 3 interceptions. 2 fumbles and 3 touchdowns. They won’t replicate that, but they get the pleasure of playing the Green Bay Packers without Aaron Rodgers this week. And oh by the way, they get Chicago & Mitchell Tribusky in Week 8. If there’s a time where the Saints defense might actually be a thing, it’s now.

This should be the National Anthem.

Picks Against The Spread

Kansas City (-3) at Oakland: Thursday night after a physical game with the Steelers doesn’t sound like the ideal time for the Chiefs to travel to Oakland for a rivalry game.

Tennessee (-5.5) at Cleveland: There isn’t an ideal time to bet on the Browns, especially with Marcus Mariota back in the saddle for the Titans.

Jacksonville (-3) at Indianapolis: Flip a coin on this one.

Baltimore at Minnesota (-5.5): I don’t see this being a particularly high scoring game. If the Vikings cover it’ll be something along the lines of 10-3.

Tampa Bay at Buffalo (-3): I still like the Bills as a playoff sleeper. The Bucs are a little too banged up and playing a little too far north for my liking.

Carolina (-3) at Chicago: The Panthers are a better team, but this feels like the sort of game they stumble & bumble their way into a loss somehow.

New Orleans (-5.5) at Green Bay: Packers defense is better than advertised & the Saints offense is never as good on the road.

Arizona vs LA Rams (-3.5): LONDON GAME. I feel that the Arizona old-timers will have a tougher time adjusting their body clocks than the younger Rams.

Seattle (-5.5) at NY Giants: Don’t look now, but the Giants actually won a game. I think their lack of WRs actually helps in this one, as it negates the Seahawks’ defense’s main advantage.

Denver at LA Chargers (-1.5): Broncos gonna be ripping & snorting after last week, and will also have quite the homefield advantage.

Cincinnati at Pittsburgh (-5.5): AFC North game. Bengals aren’t going to win, but it’ll be really close & annoying like these games usually are.

Atlanta at New England (-3.5): Super Bowl rematch! The Falcons are going to be ready for this one, especially after blowing a lead against Miami last week. They may have been looking ahead of the Dolphins but you know this one’s been circled on the calendar. The Pats probably win but it’ll be close.