Did everyone make it through the 2017 Solar Eclipse OK?

I’m assuming that if you’re reading this preview, we are all still alive and the Sun didn’t blow up the Moon and send it down to Earth in thousands of large fragments killing everyone.

Great. I think I just gave someone in Hollywood an idea for a movie.

Anyway, we are here some NFL previews, not eclipse talk. Today, we are previewing a team that surprised some people last season. Can the Miami Dolphins surprise people once again and make it back-to-back trips to the playoffs? 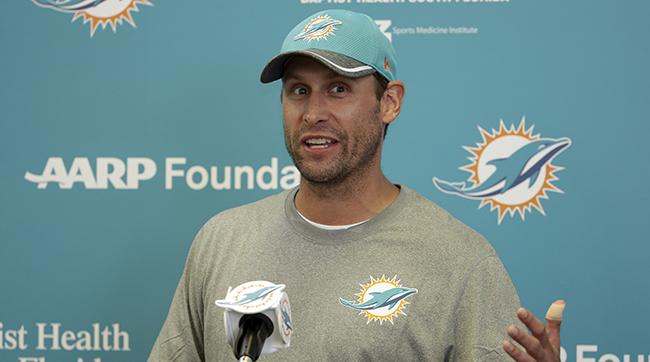 Three Things I Like About The Dolphins This Season:

-Adam Gase: For the longest time, Adam Gase was a popular “head coach in waiting” and last year we saw why. After just one year in Miami, Gase managed to get the Dolphins to the playoffs for the first time in 8 years. Not bad for a first-year head coach who is in the same division as the New England Patriots. The question now is, what can Gase do for an encore? Can he keep the momentum going or will the team slide this season? There’s a lot riding on this guy’s shoulders this season and I fully expect him to be able to carry the weight.

-Offensive Skill Players: The Dolphins QB situation is less than ideal at the moment (more on that later), but the good news for new Dolphins QB Jay Cutler is that he’s going to have a lot of good weapons to work with in Miami. Jarvis Landry is a stud. Kenny Stills was a TD machine last season. DeVante Parker is starting to come into his own. And last year was a huge turn around for running back Jay Ajayi. If Cutler fails to move the needle this season in Miami, it definitely won’t be because of lack of weapons. The Dolphins have them. They just need to be fed the ball now.

-Byron Maxwell: I’ve gone on record plenty of times that I don’t think Byron Maxwell is a very good corner. He was good in Seattle because they knew how to properly use him. The Philadelphia Eagles decided to sign him to a massive contract and made him their #1 corner and he was absolute garbage because the Eagles didn’t use him properly. They shipped him off to Miami and yes, he was awful at the beginning of the season last year and was benched. However, when the Dolphins put him back into the starting lineup, something happened. Maxwell started playing great again. It was like a light was lit under his ass or something. I liked what I saw from Maxwell to end the season last year and I fully expect him to continue that play this year. His confidence is back folks.

Three Things I Hate About The Dolphins This Season:

-QB Situation: It’s never a good thing when your QB gets injured and you’re forced to sign a guy who wasn’t in anyone’s training camp, but was growing his hair out for his great television debut. I honestly think that Jay Cutler is an improvement over Ryan Tannehill, but how good is he going to be this season on a brand new team with little preparation? Plus, we all know Cutler hasn’t been the best teammate of all-time. So no matter how you feel about the guy as a QB (and he is a pretty decent one), that’s always going to be a concern. If Cutler isn’t having a good time, the whole team is going to suffer.

-Offensive Line: Miami is garbage on the offensive line. They have some decent tackles, but everywhere else is a concern. Mike Pouncey’s play has dropped off pretty significantly and there’s no telling how he’s going to be this season. And don’t even get me started on Miami’s guards. If Jay Cutler does end up in a piss poor mood on the sidelines, it’s largely going to be because he has no protection. Prepare yourselves for the scowls Dolphins fans.

-Too Many Holes On Defense: Miami made the playoffs last season even though they had one of the NFL’s worst defenses statistically. Things don’t look like they are going to get any better this season for the Dolphins on that side of the ball either. Outside of Ndamukong Suh, Cameron Wake, Byron Maxwell, and Reshad Jones, the defense isn’t very good. Miami is exceptionally bad at linebacker, regardless of how much I love me some Kiko Alonso (GO DUCKS!). They drastically need someone to improve there as well as at cornerback. Byron Maxwell can’t do it all folks, but the Dolphins don’t have another corner on their roster that is worth a damn. This could end up being a nightmare season for Miami this year, based on the defense alone.