I’m not even sure I need to do an introduction today.

Because I’m pretty sure the only people who read these things are the actual fans of said teams in the preview, and I’m not sure there are any Jacksonville Jaguars fans. 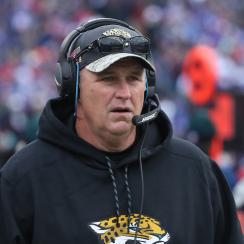 Three Things I Like About The Jaguars This Season:

-The Defense: I’m not going to lie to you guys. On paper, the Jacksonville Jaguars have what looks like a very impressive defense. They went out and signed Calais Campbell from the Arizona Cardinals and he’s going to be a huge addition to Jacksonville’s defensive along with Malik Jackson, Abry Jones, and Dante Fowler if he ever breaks into the starting rotation. I also really like Jacksonville’s linebackers. Myles Jack had a very up-and-down year last year, but he should improve this season. And as for the secondary? It’s extremely impressive with guys like Jalen Ramsey and the addition of A.J. Bouye from the Texans. I know I don’t need to remind you guys this, but A.J. Bouye was one of the best corners in the NFL last season and he’s coming over along with Barry Church. The Jaguars secondary is going to be extremely impressive this year much like the Jaguars defense as a whole.

-Leonard Fournette: The Jacksonville Jaguars were atrocious at running the ball last year. Leonard Fournette is going to be a much welcomed addition to this Jaguars offense. Fournette was a good enough running back that he could have come out of college two years ago and been a top five draft pick. For some reason, people like to bag on him and it confuses me. They did the same thing with Ezekiel Elliott last year though and look what happened. Fournette is going to be the center piece of Jacksonville’s offense. If he’s not, something went really wrong in J-Ville this year.

Three Things I Hate About The Jaguars This Season:

-Blake Bortles: This isn’t shocking news to anyone, but Blake Bortles sucks. If you look at his stats, they don’t show you how bad the guy is because he gets a lot of garbage time stats. Watch the guy play a meaningful football game and try not to cringe. It’s high time for the Jaguars to move on from Bortles, but new head coach Doug Marrone is the last resort to try to fix him. It will likely be a lost cause and I personally think the Jaguars are too good on defense to get a top five draft pick next year and secure themselves a QB. It’s a horrible spot to be in for Jacksonville. They will likely have to give up 5 good-to-great draft picks in order to move up in the draft next year to get a good QB.

-The Allen’s: What happened to Allen Hurns and Allen Robinson last season? Allen Hurns went from a pretty good player to a pretty shitastic player. And Allen Robinson was supposed to be the next big wide receiver in the NFL. However, he went on to have a mediocre season last year. Was last year just a bad year for these two and can they get it turned around? As long as Blake Bortles is around, I’m going to continue to have my doubts.

-THEY’RE THE JAGUARS!: Jacksonville has been one of the worst ran NFL organizations the last decade. They went 11-5 in 2007 and made the playoffs….and have been irrelevant ever since. Their best season since was an 8-8 season in 2010, but the rest of them have been a big ass pile of shit. The Jaguars have been a popular pick to “POP” as the NFL’s next surprise team and every year they continue to burn NFL experts. It really is an amazing feat how bad the Jaguars have been the last nine years. Will this finally be the year the Jags get over the hump and return to the playoffs? Of course not. THEY’RE THE JAGUARS!