Fantasy football is one of the most popular things in the world. It’s broken up long-term relationships. It’s ended long-term friendships. It’s caused me personally to lose tons of hair and time that I’ll never get back.

BUT WE LOVE IT THOUGH AND AS A SOCIETY, WE ARE COMPLETELY OBSESSED!

Which fantasy football rookies do I love?

And of course….which ones do I hate? 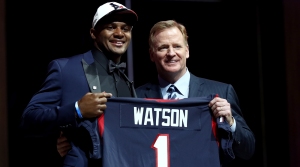 If you’re looking for a dark horse rookie QB candidate to pick up in your fantasy draft, Deshaun Watson is easily the best choice in my opinion. As far as all the rookie QB’s are concerned, Watson is in the best possible spot to start multiple games (The Texans current starting QB is Tom Savage……yuck) and potentially put up some good numbers. The Texans are a very talented team with weapons already in place for Watson to succeed. Guys like DeAndre Hopkins, Lamar Miller, Will Fuller, and potentially even Braxton Miller could definitely help ease the transition for Watson as he tries to become the one piece the Texans have sorely missed the last few seasons. A franchise QB. A recent article from Sports Illustrated that listed the potential top fantasy rookies only had one QB on that entire list. Something tells me you already know who it is. MyTopSportsBooks recently wrote a piece on NFL Draft winners and losers and he also broke down the odds for each rookie QB. Let’s just say I’m in complete agreement with him. 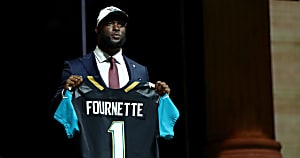 Leonard Fournette is an interesting study case heading into the NFL season. Some people (myself included), think that Fournette is going to be a stud in the NFL. This guy is the prototypical RB. If you were going to build a running back in a lab and plant him on your team, Leonard Fournette would be that guy. I was so high on Fournette heading into this season that I said any team that drafted him would likely make the playoffs. Don’t believe me? Go ahead and read it for yourself! So, do I still feel the same way knowing now that Fournette ended up on the Jaguars of all teams? YES! YES I DO! I’m gonna go ahead and go out on a limb right now. The Jacksonville Jaguars are making the playoffs within the next two years folks and Leonard Fournette will be the one to thank.

Before the draft started, I said that Mike Williams would be an absolute stud if he landed on a team that had a QB that wasn’t afraid to take chances with the football. Had Mike Williams landed on a team like the Kansas City Chiefs, he probably would have a bit of a disappointing start to his career thanks to the conservative Alex Smith. Instead, he’s going to the Los Angeles Chargers and Philip Rivers. This is a connection that I 100% love folks. Everyone knows that Rivers is not shy with the football and will try to make plays work even when they fall apart. That’s the exact kind of QB that Mike Williams needs to succeed at the next level. Go ahead and draft this guy with an early pick. Something tells me he’s going to up ridiculous numbers.

This one is a no-brainer to me. The minute that O.J. Howard got drafted by the Tampa Bay Buccaneers, he became one of the top 5 tight ends in the NFL. Howard was a stud in college football and he’s going to be a stud at the next level as well. Pairing him with Jameis Winston was a dream come true for Bucs fans. I’ve mentioned before that the addition of Howard to the Bucs is intriguing enough for me to take him if Gronkowski and Travis Kelce are already off-the-board and I fully stand behind that statement. Howard will be a top two fantasy tight end within three seasons.

Adrian Peterson is gone. Teddy Bridgewater may not ever play again, but even if he does….no one knows how good he’s going to be coming back from injury. Minnesota is going to run the ball a lot everyone. There’s a good chance that Dalvin Cook easily sees 250 touches next season. The only question is, can he be a consistent every down back for the Vikings who are going to need him to turn it on immediately if they hope to return to post-season action? I think he can, but I also have some concerns because there’s a reason he went from a potential first-rounder to the second-round. This guy is going to be one to watch next season.

Marcus Mariota needed a #1 wide receiver. The Titans have had one of the worst wide receiving units in the NFL the last few seasons. It wasn’t a secret that Tennessee was looking for a guy to pair with Mariota and to grow with him. They surprised a lot of experts when they picked Corey Davis with the 5th overall pick in the draft. I personally thought they should have grabbed Mike Williams instead, but you don’t always get what you want. I’m not sure exactly how good of a season Corey Davis is going to have next year, but he’s worth a mid-round gamble in my book.

Everyone knows the Kansas City Chiefs love to run the football. With Jamaal Charles officially out-of-town, it’s time for someone else to step up. Last year, Spencer Ware and Charcandrick West kind of fell apart as the season went on. It was obvious that KC needed some depth at the running back position, and they went out and grabbed Kareem Hunt in the third-round of the draft. I admit that I didn’t watch a lot of Kareem Hunt in college. However, after the Chiefs picked him up, I went back and watched a lot of film on this guy and man…..he is going to be a stud in the Chiefs offense. If you’re looking for a sleeper to pick up in the late rounds of your fantasy draft, pick up Kareem Hunt. Some draft experts compared him to Emmitt Smith. Is that an unfair comparison? Probably. But it might ring true.

Everyone and their mothers were laughing at the Bears when they traded up to grab Mitchell Trubisky in the first-round of the NFL Draft. There are going to be some stupid ass Bears fans that pick up Trubisky early in a fantasy draft because they think he’s going to have a “Dak Prescott/Carson Wentz” type “surprise” season. Those people will likely be kicking themselves in the ass when the fantasy season is over. Trubisky will not be a good fantasy QB next season, if ever. I’d be completely shocked if a guy with 13 college football starts comes in right away and lights up NFL defenses. It’s not going to happen.

I think John Ross will be a decent NFL player for the Cincinnati Bengals. However, I wouldn’t touch him in fantasy football next year. This one is definitely a “wait and see” approach because there’s a lot of “boom and bust” potential with Ross. We’ve all seen the NFL community fall in love with the “fastest player in the draft” time and time again and we’ve seen that guy do absolutely nothing in the NFL. Will John Ross will be another victim to that stereotype or can he buck the trend? I definitely have my concerns.

No thanks. A guy with two domestic violence arrests on his record already. A guy who some people took off of their draft boards completely because he interviewed so terribly and he’s a “horrible person”. A guy who the Jacksonville Jaguars drafted in the fourth-round because they obviously didn’t care about all those concerns. This is one pick that is likely going to come back and bite the Jaguars in the ass. Then again, they are used to that kind of thing though…..right?

And there we go! Yes, I know we are still months away from even drafting our fantasy football teams, but the more information you have now…the better.

SEE YOU AT DRAFT TIME EVERYONE!