Welcome back to everybody’s favorite NHL Postseason Preview column…ours! Jeremy Lambert and I are back to break down the next round of matchups, and if it’s anything like the first edition you’ll want to ignore my predictions and use his for betting purposes. Jeremy went 6-2 overall, with a stellar 4-0 record in the Western Conference. I told you guys all those Avs games would help him out. I struggled to 4-4 but my team is alive and well, so it’s all good as far as I’m concerned.

The first round didn’t feature any seven-game series, but we did get to see plenty of overtime games and there were a couple of exciting upsets, so everybody seems pretty happy with how things went. Well, outside of Chicago & Montreal, but who cares about them? We move onto the next round…

Steve Cook: I already chronicled the Preds’ tremendous first round showing against Chicago, so let’s talk about the St. Louis Blues here. If the Blues weren’t based out of St. Louis or facing the Preds in this round, I could see this as a bandwagon worth jumping on. The Blues were among the first expansion teams in 1967 and are the oldest franchise never to win the Stanley Cup. They even appeared in the Cup Finals their first three seasons because of the way the NHL stacked the conferences, but got swept each time and haven’t been back since. Considering this and the fact they’ve had two football teams leave town, St. Louis fans are really lucky that their baseball franchise has done pretty well over the years, otherwise they would be hating life as much as any city’s sports fans.

The Blues this season are a pretty good story too. The brass gave up on this team a couple of times, firing coach Ken Hitchcock midway through the season and then trading star defenseman Kevin Shattenkirk at the trade deadline. Both of these moves smelled of a team building for next year and giving up on this year, but the guys on the ice didn’t care about all that. They kept playing, kept winning and here they are. Seriously, I would love this story if it wasn’t going up against my Preds. And if it wasn’t from St. Louis.

The Preds & Blues both had rough starts and took some time to find their way, but they did at the right time and knocked out the teams ahead of them in the regular season standings. Nobody remembers those standings now. Games between these teams were hard-fought and I expect the same here, a series going down to the wire but at the end of the day…I gotta go with the team with more playoff experience and more demons to slay.

Jeremy Lambert: The Blues were fortunate to catch the Minnesota Wild and Bruce Boudreau in the first round. They were outplayed for most of the series, but ended up winning because the Wild and Boudreau don’t know how to get out of the first round. Meanwhile, the Predators swept the Blackhawks. I’ll admit that, while I picked Nashville to win the series, I never imagined a sweep. There’s something special about this Preds team though. They have a good mix of veterans and young players, their defense corps is arguably the best in the league, and they have a Cup winning head coach. The Blue have firepower, but they can’t get outplayed every game and expect to win in five like they did against Minnesota. Look for the Predators to clog up the Blues offense, take advantage of their mediocre defense, and pray that Jake Allen cools off.

Steve Cook: Unlike the Central Division & its bracket-busting craziness, the Pacific Division was all chalk. The Ducks swept another team from Alberta in the first round while the Oilers finished off another team from California in six games. The war between America’s most populous state and Canada’s fourth highest populated province must be settled in the conference semi-finals.

We talked about the Preds & the Blues getting hot at the right time…they’re not nearly as hot as the Ducks right now. 15-0-3 in their last eighteen games, including that four-game sweep of Calgary. You would think they would have to lose at some point, but they’re doing their dead level best not to. Ryan Getzlaf, like the captain he is, led the Ducks in goals & points during the regular season and is doing the same after four games in the post season. The Ducks are tremendously deep offensively and with Bruce Boudreau out of the way are going to be tough for anybody to beat in the postseason. Calgary had some good stretches against them, but the Ducks found a way to get it done in every single game. That’s what a contender does.

The Oilers appear to be the future of the Western Conference, and the future might be now. Connor McDavid gets all the hype here, and he deserves all the hype he gets, but the team around him can get it done too. Cam Talbot was good in the Sharks series except for Game 4, and the Oilers’ responding to that seven-goal beatdown by winning Games 5 & 6 shows that this team has the mental toughness to hang with anybody in the NHL.

I see this series going seven, and for the sake of the NHL, which could use a superstar-making postseason from McDavid, I will pick the Oilers to move through to the next round.

Jeremy Lambert: I think the Oilers caught a slight break in the first round, which is why I picked them. The Sharks are an aging team coming off their first long playoff run. The Oilers were fresh and fast. The Ducks aren’t exactly spry, but they have fresher legs than the Sharks and Cup winning experience. I love this Edmonton team, but they still feel a year away to me. It was painfully obvious that the Sharks were completely gassed after game four. That’s not happening to Anaheim. They are a little banged up on the backend, but they’re getting healthy and still have enough depth to make up for the injuries. They’re red hot and have Ryan Kesler, who will annoy the hell out of McDavid on every single shift.

Steve Cook: I fully expected this side of the bracket to give us Montreal vs. Boston, an Original Six rivalry and the battle of teams coached by Claude Julien this season. So instead we get Ottawa vs. New York. Because of course we do. The Rangers had to be happy to get out of the Metropolitan side of the bracket and now they’re four wins away from getting to the conference final. The big story with them is the quest to get Henrik Lundqvist a Cup, as he’s widely considered one of the best goalies without one. The Senators have a great goalie story too, as Craig Anderson’s wife has been undergoing cancer treatment and he’s taken off multiple times this season to be with her. You’d love to see both of these guys win, but only one can make it to the next round.

I’ll be rooting for the Sens, mostly because Jimmy Vesey is a douchebag and I loved it when Max Pacioretty beat the snot out of him in Game 6. This is the side of the bracket where I haven’t really seen enough of these teams to have a firm opinion one way or the other. When I’m in this kind of situation I tend to go with the team that’s a bigger deal and will draw more ratings.

Jeremy Lambert: I don’t bet against Henrik Lundqvist in the playoffs. Except last round, where I bet against him against Carey Price. But that was Carey Price. This is Craig Anderson, who I love from his Colorado days, but don’t fully trust him. The Senators caught a lot of breaks in the Boston series that they likely won’t catch in this series. In fact, the Sens are up against it a bit as Erik Karlsson is playing with a foot injury. If he’s not effective, the Sens’ entire game falls apart. The Rangers are deep up front and have the best goalie in the world. 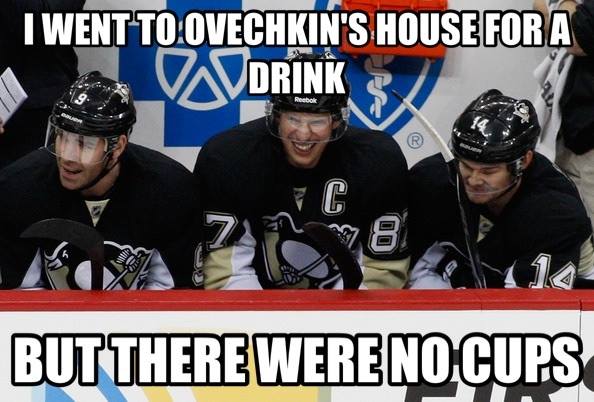 Steve Cook: One could argue that this series features the two best teams in the NHL. The Caps won the Presidents’ Trophy for the best regular season record while the Pens had the second-most overall points and are the defending Stanley Cup Champions. It’s a tough break for both teams to play at this stage of the playoffs, and people that like to complain about playoff seeding are all over this one.

Yet, I think this one might be easier to predict than any of the other series. Pittsburgh has won eight of the nine playoff series these teams have had. Washington has been snake-bitten in the playoffs as long as anyone can remember. Alex Ovechkin is jinxed. Barry Trotz hasn’t gotten over the hump. The Penguins always win in the postseason and looked a lot better in their series with Columbus than the Capitals did against the pesky Toronto Maple Leafs.

The cute thing to do would be to say this is the year Washington gets over the hump. As everybody knows by now, I’m not cute.

Jeremy Lambert: As I figured, the young Toronto Maple Leafs gave the Capitals a scare. They survived, but now they have to face their old nemesis: Sidney Crosby and the Pittsburgh Penguins. At some point, the Caps will get over the hump, but it’s tough to see that happening anytime soon as long as they have to face the Pens in the second round. I really want this Washington team to succeed because I like Alex Ovechkin, but Crosby has his number. The Caps are too good to roll over, but their mental weakness in the playoffs can’t have fans feeling good.

Next time we’re back, we’ll be down to the Final Four and wondering which organization is destined for One Shining Moment. Oh crap, wrong sport. See ya then!