Like I wrote about back in September, it needed to happen. Helfrich was handed the keys to a Mercedes from Chip Kelly and after a few years of driving it, he’s dinged it up and left it barely drive-able.

Everything about the program was pointing downward. The recruiting was lacking. The team had lost the identity it had during the Chip Kelly run. Bringing in graduate transfers to quarterback your team in back-to-back years (who does that?). Absolutely no leaders anywhere on the roster, including on the coaching staff. And if that wasn’t enough, here’s a few more negatives against Helfrich….

-and of course….the worst season the Ducks have had since 1991 with a lot of streaks ending in the process

Helfrich had to go. It just needed to happen. Some people are bashing the move and calling Ducks fans spoiled for over-reacting over one bad season. It wasn’t just the one bad season Helfrich had. There were numerous knocks against him and the negatives outweighed the positives at this point.

Let’s say you run a small Ma and Pa store which turns into a huge success and you have 10+ years of REALLY good business which caused you to expand. Now let’s say you have one to two bad years financially and it looks like it’s going to get worse before it gets better. Are you supposed to just accept that happening so you don’t look spoiled in the eyes of other people? Fuck that. You make some changes to stop the bleeding before it gets any worse. It’s not being spoiled, it’s being smart.

Coaching is a cut throat business. If you get your feelings hurt easily, perhaps you shouldn’t be coaching football? It might sound harsh, but it’s the truth. A lot of people like to point out that Helfirch was 37-16 overall as Oregon head coach, which is pretty damn good all things considered. However, Helfrich was 13-12 in his last two seasons and we live in a “WHAT HAVE YOU DONE FOR ME LATELY?” society. That record isn’t going to cut it.

So, Helfrich is officially gone as Oregon’s head coach. Now the question is….who will replace him? The truth is, no one knows. You can sit here and read rumors all day long, but no one really knows what’s going on with the coaching search. The only thing we know for sure is, Oregon intends to make a splash with this hire. You don’t fire Helfrich, who has an $11 million buyout, unless you plan on making a home-run hire. So, who will the Ducks go out and get? Like I just said, no one really knows. Did anyone predict Gary Anderson would wind up at Oregon State? No. While it’s cool to see rumors and all, it’s all just a smoke screen and no one knows who the Ducks are targeting.

But it sure is fun to talk about and debate though, isn’t it? That’s what this column is all about.

I have no idea who’s going to be the next head football coach at the University of Oregon, but it wouldn’t surprise me if it was one of the following……

Jim McElwain’s name is getting a lot of hype right now surrounding the Oregon job. I know it sounds odd that the Florida Gators head coach would leave, especially after becoming the first head coach in SEC history to reach the conference title game in back-to-back years. But rumors are rampant that McElwain is not happy at Florida and could be looking for a new job. It just so happens that McElwain was born in the Pacific Northwest and played football at Eastern Washington. If McElwain is indeed looking to leave his job at Florida, taking the job as head coach of the Oregon Ducks wouldn’t be a huge step down and both parties would end up happy. That’s really what its all about, right?

Every year in college football, there is a head coach of a non-Power 5 team who’s stock absolutely explodes. This year? That man is P.J. Fleck and for good reason. Fleck took the job at Western Michigan four years ago and that program was a dumpster fire. Fast forward to the present day and Fleck and the Broncos are the only undefeated team left in college football not named Alabama. Fleck is going to get a ton of job offers in the next few weeks and I would be shocked to see him stay at Western Michigan. The guy is going to be coaching somewhere else next season, will that place be Oregon? Fleck would be a nice hire and would likely have success in Oregon, but was firing Mark Helfrich worth it to bring in a guy like Fleck? 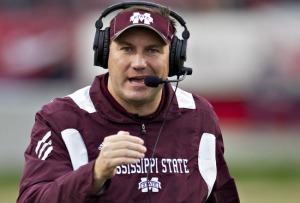 Rumors are rampant that Dan Mullen would love to get out of Starksville. After eight seasons as head coach of Mississippi State, it might be time to move on. If that happens, it’s highly likely that he would have interest in the Oregon job and vice versa. A lot of Oregon fans probably wouldn’t get excited about this hire, but it would be a good one. Mullen has done a good job at Mississippi State, a program that historically isn’t good. The one thing that has really hurt the Oregon program recently is the lack of good play at the QB position. Mullen would definitely fix that as the guy is considered a QB guru (look at the way Dak Prescott is playing in the NFL right now), but is that enough to get Ducks fans excited?

If you read a column about who will be Oregon’s next head coach, you will see Bryan Harsin’s name on it and it’s well deserved. What Harsin has been able to do at two different programs (Arkansas State, Boise State) is pretty impressive and you would think with the right resources, Harsin would be a homerun hire. However, I just don’t see it happening. When Chip Kelly left Oregon, the Ducks had the chance to go grab Chris Petersen from Boise State and he likely would have accepted the head coaching job. They didn’t though. If they didn’t look at Boise State’s head coach before, why would they look that way now? Because Petersen is having success at Washington? Harsin isn’t exactly a splash of a hire and like I mentioned earlier, Oregon isn’t firing Helfrich unless they intend to make a splash.

Kyle Whittingham has been head coach of the Utah Utes for 13 years now. He took over for Urban Meyer and has done a tremendous job ever since. However, Whittingham is handicapped at the University of Utah and could potentially look to spread his wings at a new program. Whittingham is 9-1 all-time in bowl games, is a good recruiter, and is one of the best in-game coaches in the PAC-12. Ducks fans likely wouldn’t be happy with this hire, but I would. Whittingham is quietly one of the best coaches in college football.

Wait a minute. This guy can’t really be considered a head coach candidate at the University of Oregon, can he? Why would the Ducks fire Helfrich and hire a guy who is 40-45 all-time? Because the guy is a damn good coach who’s record doesn’t show that. USF is not a good job at all. The program is historically garbage, but they have one good thing going. That thing is Willie Taggart. Taggart took the job at USF back in 2013 and has steadily improved every year since. That’s the sign of a good head coach. You want the program to trend UPWARDS after a hire. Not downwards….which is what was happening with Oregon. If Taggart can build USF up and have a 10-2 season like they have this year, what could he do at a school like Oregon with better resources? I personally think Taggart is a long shot to get the job and the Ducks likely wouldn’t even sniff around him, but he would secretly be a good hire.

This one isn’t going to happen, but it’s fun to dream though…right? No one really knows what Chip Kelly is thinking and the guy plays his hand quite well. It’s pretty evident by now that he’s not a good NFL head coach and he’s much better suited for the college game. I think everyone knows this but Chip Kelly himself. Chip’s stock is at an all-time low and if he wanted to re-build his brand up….why not go back to the place where it all started? If Chip went back to Oregon and returned the program to the glory they were at from 2009-2014, he would be a god. The University would likely start building a Chip Kelly statue and it wouldn’t surprise me at all to see the city change it’s name from Eugene, Oregon to Chip Kelly, Oregon. There’s an extremely small chance of this happening, but it would be amazing if it did. 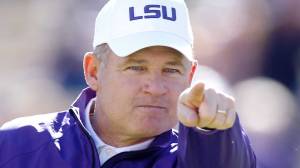 If the Oregon Ducks are really looking to rebuild the program from the bottom up, Les Miles is the guy they need to hire. Miles would be a huge hire for Oregon, especially if he brought in a staff that included guys like Steve Sarkisian who have a history of recruiting really well. The most important part of the Oregon job is recruiting. With so little talent coming out of the state of Oregon itself, it’s huge for the Ducks to grab kids from Texas and other Southern states. You know who has a long history with recruits in the South? LES FREAKING MILES! Not only that, but Miles is a damn good head coach who was screwed by LSU. After twelve seasons as head coach of the Tigers, Miles was fired even though he never went worse than 8-5 and always made a bowl game. If Phil Knight and the Ducks want to make a splash of a hire, they could do a lot worse than Les Miles.

Other potential candidates for the Oregon job include:

One thought on “Who Will Be Oregon’s Next Head Coach?”