The NFL season is officially halfway over.

I know exactly how you feel. It feels like the season just started, and yet here we are already looking towards the finish line.

It’s both sad and exhilarating at the same time. It’s sad because when football is no longer in our lives, the world is an extremely sad place. It’s exhilarating because that means the playoffs are right around the corner and you know who loves them some playoff football? THIS GUY!

So, since we are at the halfway point of the NFL season, it’s time to hand out some mid-season hardware.

Who’s the Rookie of the Year so far in the NFL?

Which team has been the most impressive?

Which team has been the most disappointing?

Who’s the front-runner for MVP?

Most Disappointing Team of the Mid-Season

It wasn’t supposed to be like this for the Carolina Panthers. After getting to the Super Bowl last year, expectations were through the roof for these guys this season. Unfortunately, they haven’t been met yet. After starting out the season 14-0 last year and making it all the way to the Super Bowl, the Panthers have regressed as a team. Cam Newton went from an MVP candidate to making more noise off-the-field with his wardrobe choices than his actual playing skills. Josh Norman took his ball and went to the Washington Redskins. And the result hasn’t been pretty. The Panthers are sitting at 2-5 on the season and are four games behind the Atlanta Falcons in the division with only nine games left on their schedule. To say the Panthers need to have a HUUUUUGE second half in the NFL would be an understatement. They need to be damn near perfect if they expect to play any kind of post-season football. Personally, I think they’re done.

Most Surprising Team of the Mid-Season

On paper, the Tennessee Titans are not a very good football team. They have one of the worst head coaches in the league. Their ownership is a mess. And they were widely expected to be an absolute dumpster fire this season. That hasn’t happened though. What’s happened on the field with the Tennessee Titans this season so far has bordered on a miracle. The team’s offensive line has played absolutely out of it’s mind and has blossomed into one of the best units in the league. That’s obviously helped second-year quarterback Marcus Mariota continue to develop into one of the league’s best young signal-callers. The team has a nice two-headed monster at running back with DeMarco Murray and Derrick Henry that has also helped the offense continue to grow. The defense could use some improvement, but they are playing good enough to get the job done. Don’t look now, but the Titans are only one-game behind the Texans in the AFC South. Can a team that a lot of people predicted as one of the worst in the league actually sneak into the playoffs? It’s possible, especially if they keep playing like this.

Comeback Player Of The Mid-Season

DeMarco Murray went from the leading rusher in the 2014-15 NFL season to an absolute joke last year in Philadelphia. Murray was so bad last season, that NFL fans were dumping his stock in droves and proclaiming his NFL career to be over. Not so fast my friends! Sometimes a player can get traded to a team that doesn’t actually utilize the guys talents correctly, whether that be because of a stubborn head coach or just a bad fit scheme-wise. That doesn’t exactly mean the player himself is done. That looks to be the case with DeMarco Murray. Chip Kelly was right. Murray is a great running back. Unfortunately for Kelly, he wasn’t a great running back in his scheme. In the Titans scheme though? Yes sir….give me more. As of press time, Murray is the second leading rusher in the NFL and is well-positioned to finish the season as the league leader in rushing yards. Does that leave a bad taste in Eagles fans mouths?

Defensive Rookie of the Mid-Season

Things didn’t start out well between the San Diego Chargers and top NFL Draft pick Joey Bosa. Bosa had a contract dispute with the Chargers that bordered on ugly. It got to the point where people were actually talking about Bosa never playing a snap for the Chargers. Well, San Diego fans can go ahead and breath a sigh of relief because that never happened. Still, there were a lot of concerns about him going into this season. After missing a lot of the off-season team activities, no one knew how Bosa was going to play this season. Well, the kid has played absolutely out of his mind. He has four sacks on the season. He’s a beast at getting to the quarterback. According to Pro Football Focus, he’s the THIRD BEST GRADED PASS RUSHER on this season behind only Brandon Graham of the Eagles and some dude named Von Miller. Yes, Joey Bosa is a stud. There’s a reason the kid was holding out before he ever stepped on an NFL field. He’s the real deal.

Offensive Rookie of the Mid-Season

Some things are just way too easy to predict, and if you try to out-smart the room….you could end up looking stupid. That’s how I feel about Ezekiel Elliott and the Dallas Cowboys. From the moment the Cowboys announced they drafted Elliott, it was obvious what was going to happen. You put one of the best running back prospects in YEARS behind one of the best offensive lines in football? Ya, watch out. This was one of the easiest things to predict in the NFL in sometime in my opinion. Elliott was a stud at Ohio State and like I mentioned earlier, he was one of the best running back prospects we’ve seen in sometime. When the Cowboys announced that they drafted him, we all knew what was coming and that’s exactly what has happened. We are sitting at the halfway point of the season and Elliott is currently the NFL’s rushing leader and is primed to finish at the top when the season ends. Not bad. Not bad at all.

Defensive Player of the Mid-Season

Offensive Player of the Mid-Season

Julio Jones has been a beast so far this year. He has five games with over 100 yards receiving. He currently leads the NFL in receiving yards with 970 yards and could end up flirting with 2,000 receiving yards by the time the season is all said and done. He’s one of the many reasons the Falcons have started out the season with a surprising 6-3 record and currently have a stranglehold on first-place in the NFC South. The Falcons are going to make the playoffs this year and Julio Jones’ play this season is a big reason why. Oh, did I also mention that he’s Pro Football Focus’ top graded wide receiver this season as well? Remember all those trade assets the Falcons had to give up to acquire Jones in the NFL Draft? Dare I say that it’s finally starting to pay off?

Coach of the Mid-Season 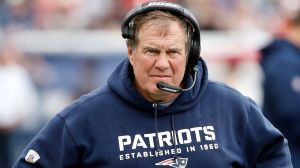 Oh, you were expecting someone else? C’mon people. He’s the GOAT for a reason.

MVP of the Mid-Season

Oh, you were expecting someone else? C’mon people. He’s the GOAT for a reason. And he’s my MVP of the season and he’s only played in FOUR FREAKING GAMES SO FAR! I warned you guys. I said the “TOM BRADY FUCK YOU TOUR” would be amazing this year and it has been so far. The Patriots look like the best team in the league and it would shock me to see any other team holding the Lombardi Trophy at the end of the year. Tom Brady is on a mission right now and if you get in his way….you’re going to be just another victim.

And that’s it for the mid-season awards here at THE Ultimate Sports Blog! Can these players continue their success this season as we officially point our ships toward the playoffs?