As a long-suffering sports fan I try not to get too excited about seasons before they happen. Others will pump their chest & declare this will be the year their team runs roughshod over their league and wins it all. That’s never been me. I always temper expectations because I have a good idea of what will happen at the end of the season. With two exceptions (1990 Cincinnati Reds, 2012-13 Louisville Cardinals), every single season I’ve known has ended with my team coming up short of the biggest prize in their sport.

I watch a lot of sports and follow a lot of teams, so that’s a lot of seasons.

I can’t help but feel some optimism about the upcoming Nashville Predators season though. I’ve been feeling this way ever since June 29, when The Trade Heard Around The Hockey World sent Shea Weber to Montreal in exchange for P.K. Subban. The Preds lost their captain, but gained a rock star. 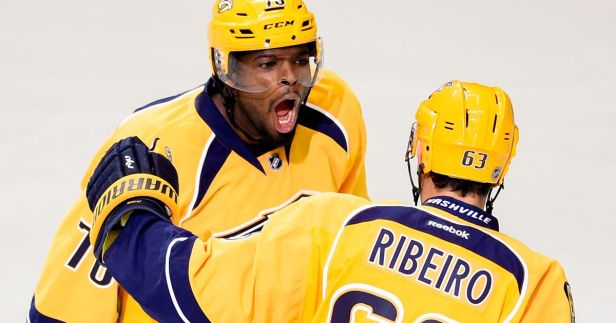 In a sport that is lacking in charismatic stars, Subban has the type of personality that you can build an organization around. He’s already become the face of the Predators franchise and he hasn’t played a regular season game yet. As great as Shea Weber was in Nashville (and will be in Montreal, it’s not like he’s dead or anything), he wasn’t a dynamite personality that would make non-hardcore hockey fans notice him. Subban does that. In addition to all that good off-ice stuff that doesn’t work in a fuddy-duddy organization like Montreal but is great for Nashville, Subban’s also one of the most gifted defensemen in the NHL. He isn’t gritty like Weber & doesn’t have the hardest slapshot in hockey like Weber does, but he’s a better skater, more versatile, and younger.

Can you tell I’m pretty excited about Subban? Let’s not forget about the other Preds, though. The defense has long been the calling card for the Predators and it’s only gotten more talented through the years. Roman Josi has become one of the most talented defensemen in the league and got even more notice recently with his performance helping lead the lightly-regarded Team Europe to the World Cup of Hockey Final. Mattias Ekholm & Ryan Ellis did a bang-up job on Nashville’s second defensive pairing last season. The Preds’ first four defensive players compare well to any team in hockey & is a main reason why some preseason prognosticators have high expectations. Nashville acquired some good depth during the off-season in Yannick Weber & Matt Carle that should be decent enough when the stars are resting.

Offense has been a struggle for the Preds throughout the franchise’s existence, but since Peter Laviolette took over as coach they’ve done a lot better on that end. They’ve also acquired some top offensive talent over the past couple of years thanks to GM David Poile making some key trades. Filip Forsberg, James Neal & Ryan Johansen have all become key cogs in the Preds offensive attack and give the team more firepower than they’ve ever had. Colin Wilson is always lights-out in the playoffs. And of course there’s Mike Fisher, the new captain of the Preds & mayor of Nashville. Hopefully players like Viktor Arvidsson, Colton Sissons & Miikka Salomaki will continue their development and guys like Craig Smith & Mike Ribeiro will show good veteran presence.

The main question mark is the goalkeeping. That could never be said before now, but let’s face it, Pekka Rinne’s getting up there in goalie age & he wasn’t on his normal Pekka level for much of the 2015-16 season. The unproven Marek Mazanec will be his backup and we’ll need to see much improved play from him & probably a lot more of it to keep Pekka fresh. This might have to be the next area of the team addressed by GM Poile at some point during the season.

As good as the Preds look on paper, you also have to keep in mind that most of the rest of the NHL Central feels just as optimistic about their chances and has good reason to be. The Blackhawks are the perennial favorites of the Western Conference and are looking to rebound from a disappointing season by their standards. The Stars are as dangerous on offense as any team in hockey. The Wild added a new coach in Bruce Boudreau who will be looking to prove he’s more than just a regular season wizard. The Blues lost some veterans to free agency, but they’ve got more than enough depth to make up for it. The Jets have some good young talent and will be difficult to beat on any evening. The Avalanche have looked like world-beaters in the preseason and no longer have Patrick Roy holding them back. As usual, the Central will be a dogfight and any three to five of these teams could end up making the playoffs.

That all being said, I have a good feeling about this season. Barring a catastrophic run of bad luck or injury, the Predators have themselves in a good place to make a lot of noise this regular season and this postseason. That’s really all any fan can ask for at the end of the day…a chance to celebrate.