Did everyone survive the first week of SURVIVOR FOOTBALL?!?!

I’m sure a lot of you have already been eliminated (no one here at THE USB was…humble brag), but for those of you who are still alive, here are the smartest picks for week two as well as our own experts picks! 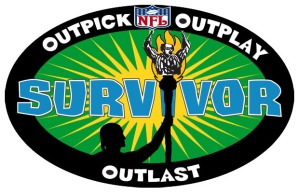 Verdict: Are you kidding me? Whenever the Steelers and the Bengals play, the games seem like tightly contested football games and are the closest thing you can get to a war zone on the field. I mentioned before that I absolutely hate taking divisional games in survivor league because of the familiarity that the teams have with one another. I’m staying far as I possibly can from this game as it really could swing either way. You saw that playoff game nine months ago, right? We could be in store for another game exactly like that one. No thanks.

Verdict: These teams haven’t played each other a whole lot, which makes this an interesting game. However, I think Detroit is way more talented than the Titans are. A little known secret is that the Lions were one of the hottest teams to end the season last year. After a big win in Indianapolis last week, Detroit is rolling right now. I would gladly take the Lions in a survivor league this week as I feel like it’s one of the strongest plays with all apologies to Marcus Mariota.

Verdict: This game is going to suck. Neither the Ravens or the Browns are very good and I have zero interest in this game. There’s no way I would bet it in any form. However, if you forced me to take a team….I would likely take the Ravens and wouldn’t bat an eye. Baltimore has a better roster than Cleveland. They have a better head coach. And they absolutely own the Browns on the road. I wouldn’t personally touch this game in a survivor league (the two teams split the series last year), but if you’re feeling brave….take the Ravens. It might be your only opportunity to use them this season.

Verdict: Stay as far away from this game as you possibly can when it comes to survivor leagues. Trust me.

Verdict: Tread lightly with this game. On one hand, I wouldn’t touch it because of what happened last season when these two teams met on the football field. It was one of those “no defense/shoot-out” games that are extremely fun to watch on television, but are a survivor league nightmare. On the other hand, I would be tempted to take the Giants. New York has owned New Orleans at home (the Saints haven’t beaten the Giants in New York in ten years), and even though last year’s game was close…I think the Giants have improved from last season and I expect them to win this football game. Like I said earlier, tread lightly with this one. If you’re feeling brave, take the Giants.

Verdict: This game is one of the strongest plays of the week. I don’t care about the teams records and what happened in week one. The Panthers are WAAAAAAAAAYYYYYY more talented than the 49ers are and they should boat race them this weekend. San Francisco looked really good in week one, but let’s not fool ourselves here. The Los Angeles Rams were absolutely terrible on Monday Night and put on one of the worst performances in NFL history and the 49ers benefited from that big-time. Do you guys remember what team looked really good last year in week one on Monday Night Football? The 49ers! Remember what happened after that game? Yep. Take the Panthers this week and don’t even bat an eye about it.

Verdict: Nope. Stay away. Much like Tom Brady, you should want nothing to do with this game.

Verdict: A lot of people are probably tempted to take the Kansas City Chiefs in this game. I mean, all signs point towards the Chiefs getting the victory. They were 2-0 last year vs. the Texans including that 30-0 ass whooping in the playoffs that still stings with Texans players. Not only that, but Andy Reid has never lost to the Texans as a head coach. If you like to live dangerously, you could take the Chiefs in this game and cross your fingers. However, I like to live smart myself. There’s no way I’m touching this game. With Houston, you have the whole revenge factor. These guys definitely don’t want to get their asses kicked on their home-field again and they will come to play. Kansas City has some worrisome injuries that scare me going into this game (their two starting guards, Jamaal Charles, and Justin Houston are all out), and there’s just no way I feel extremely confident going into this game as a Chiefs fan after that scare last week vs. San Diego. I wouldn’t touch this game myself, even though a lot of people may be tempted to take KC.

Verdict: People are going to be tempted to take the Seahawks after the Rams’ awful showing on Monday Night Football. However, I’m here to tell you to BE CAREFUL! I know the Rams looked extremely awful against the 49ers last week, but there’s something about the Seahawks that brings it out in Jeff Fisher’s teams. The Rams always give Seattle a good fight and even though they look like the worst team in the league, they could still surprise some people this week, especially with Russell Wilson nursing a bum ankle. The Rams actually swept the Seahawks last season in games that were decided by one score. What’s going to happen when these two teams meet up this Sunday? Will the Rams finally show up or will Seattle absolutely maul them? I have no idea which is why I’m staying FAR FAR away from this sucker.

Verdict: This should be one of the best games of the week. Tampa Bay looked like a well-oiled machine in week one and I’m excited to see what this offense can do against a real defense in Arizona. Jameis Winston will be a top-10 NFL QB by the end of the year, if he isn’t already. If he comes out against the Cardinals and shreds their defense, I’m officially on the Bucs bandwagon for the rest of the season. That’s not going to be an easy task though as the Cardinals are one of the best teams in the NFC and are going to be a real test for the Bucs. I’m just going to sit back as an NFL fan and enjoy this game. There’s no way I’m picking either one of these teams this week in a survivor league. I think the Cardinals will pull out the win, but I can’t say that with a lot of confidence. Tampa Bay is one of those teams that we just don’t know what they are yet. They look good, but buyer’s beware.

Verdict: This is a sneaky pick this week. Looking at the stats, all signs point towards picking the Chargers. What do I mean exactly? Well, San Diego defeated Jacksonville last season in a tightly-contested game. Also, the Jaguars have NEVER won a game in San Diego. And to top it all off, the Chargers looked good against a good team in the Chiefs last week before falling flat on their faces in the second-half and may want to prove that last half of the game was all just a fluke. While I personally wouldn’t touch this game myself, I think the Chargers are going to win the game and are one of the sneaky picks of the week.

Verdict: I like the Raiders in this one and they are likely one of the smartest picks of the week. I think this game is going to be a lot like last week’s game against the Saints. A high-scoring affair with little defense played. The Raiders don’t have anyone who can cover Julio Jones and Oakland’s offense has way too many weapons for this Falcons defense to contain. I think this is going to be one of the best games to watch this weekend and I expect the Raiders to come out of it with a 2-0 record. Don’t look now, but Oakland is back?

Verdict: No thank you. This game could go either way. I love Andrew Luck, but I also love Denver’s defense. This will be an extremely interesting game, but I’m not touching it in a survivor league.

Verdict: This one is a bit of a trap game to me. I know a lot of people are probably tempted to take the Eagles after what we saw from these teams in week one. Personally though, I’m not touching this game in a survivor league. Philly is going on-the-road with a rookie QB who’s playing in his first away game. Not only that, but the Eagles have only managed to win FIVE GAMES in the city of Chicago during the course of their franchise history. To say I’m not extremely confident in the Eagles going into Chicago and picking up a win this weekend is an understatement. Even though Philly looked like a much better team than the Bears did last week, it wouldn’t shock me at all to see Chicago pick up the win on Monday Night Football.

And there’s your line-up of games to choose from for week two. And just for fun, THE Ultimate Sports Blog’s own football experts will play along each week and provide our own picks to see who takes home the trophy. Here are our picks for this week……