Hi, hello & welcome to the 2016 NFL season! I’m Steve Cook, and man is it great to be back in the saddle again. By popular demand, the picks column has returned to THE USB for yet another season. I know that gambling is a big part of the popularity of the National Football League and I hope to help you lovely people make some big money to cover your mortgages, Christmas presents, or whatever you spend money on these days.

We’ve already covered the Thursday game this week, and that might be a common occurrence because it gives me more time to ponder the rest of the games and not worry about a Thursday deadline. Let’s get to the rest of the hot NFL Week 1 action!

Two NFC South teams seemingly headed in opposite directions here. We love Famous Jameis & what’s going on with the Buc offense. We think Matt Ryan’s headed downhill, and while we love Julio Jones we’re not 100% sold on the “weapons” they brought in to help Jones out. We’re sure as heck not sold on their defense.

What I am sold on is the Falcons early in the season. It’s what happens after they go 6-0 that gets them in trouble. It’s extremely tough to win a division game on the road, and one wonders if Winston might have a bit of a slow start like he did last season.

So Teddy Bridgewater gets his leg exploded and Vikings management loses their damn mind & trade a first & fourth round pick for Sam Bradford. I don’t get it. People keep trying to make Sam Bradford a thing, but it never happens. The defense is that the Vikings are built to win now and we don’t know when Teddy will be able to play again. 2017 isn’t guaranteed at this point, and with Adrian Peterson on the back nine of his career the Vikings can’t afford to waste time with 85 year old Shaun Hill. Bradford is a guy every executive in the league seems to think is a superstar even though he’s never actually played a full season without missing a good chunk of time. He’ll get a chance to succeed in Minnesota, and he gets an easy Week 1 opponent. So we’ll see.

Tennessee is kind of a mess, but their running game should be improved with DeMarco Murray & Derrick Henry. The funny thing about the Titans is sometimes they win random early games and have very impressive showings & try & trick us into thinking they’re not the worst team in the league. Remember last year when they blew out Tampa Bay and we thought Marcus Mariota was going to have the best season ever? How about 2014, when they beat the Chiefs in Kansas City & we thought that the Chiefs were going to be a dumpster fire? In 2013 they went 3-1 in September.

This is what the Titans do. They’re not going to be good, but they can sneak up on teams early. Especially teams like Minnesota that are trying to decide between Sam Bradford & Shaun Hill. The Vikings will figure it out eventually, but not soon enough to help us out this week.

HUE JACKSON! DOUG PEDERSON! RG3! CARSON WENTZ! IT’S THE NFL ON CBS! Lots of changes with both of these teams over the offseason, which frankly is what both teams needed. It certainly makes it difficult to pick a winner here though, as we don’t really know what to expect out of either team. 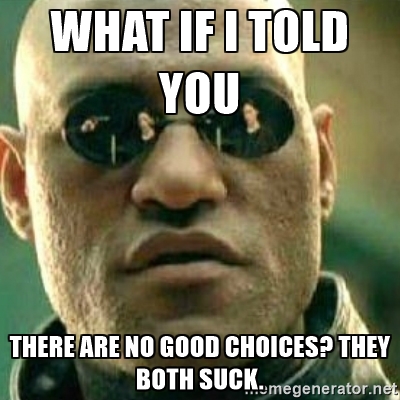 That’s probably true. Go with the Browns since they’re getting four points and this feels like one of those field goal-deciding games.

Welp. Another Bengals season is at hand. All of their wide receivers are gone except for A.J. Green. Tyler Eifert isn’t playing until Week 4 maybe possibly. Vontaze Burfict will also be back in Week 4. And they’re the favorite here, which really doesn’t speak well for how people feel about the Jets.

I’m going with the Jets though. Part of it is due to pessimism. But part of it is due to the fact that it’s CBS’s featured Week 1 game. Jim Nantz & Phil Simms will be on the call. It’ll be September 11 in the New York/New Jersey metropolitan area, so emotions will be running high for everybody involved. The Bengals do not fare well in these situations, and as much as I’d like to believe that they’ve magically gotten over the hump and are capable of winning a big game…I just don’t see it happening.

OK, this is pretty interesting. Saints are usually unbeatable at home…except last year when they were 4-4. The Raiders don’t really have a home, and are one of the sexy picks to step up to the next level this season. Expect a high-scoring game here, probably the most entertaining of the afternoon because there won’t be a whole lot of defense played. Gonna go with the sexy Raiders on this one, it seems like they’re going up in stock while the Saints are trying to figure out how to spend the salary cap money they won’t be giving Drew Brees.

And if the Raiders lose, get ready to see everybody jump off that bandwagon even if it is Drew Brees.

I’m not sure if I just picked the Chiefs to make the Super Bowl to stick it to Dustin James or because they’re actually a contender. If they are, they’ll have no problem beating up a bad Charger defense with Spencer Ware. The Charger offense has the unfortunate task of going against the Kansas City defense, which Dustin tells me is better than the Denver defense. Gotta go Chiefs here.

I expect the Ravens to bounce back this season, which is a shame because I really liked how they were irrelevant last season. It was a nice change of pace. The only things that will be bouncing around in Buffalo will be Rex & Rob Ryan. That’s a pretty bad visual.

Rob doesn’t even wanna see it.

I’m higher on Brock Osweiler than a lot of people seem to be, specifically people that either root for or are the Denver Broncos and are mad that he took more money to go somewhere else & messed up their succession plan. He’s got a good situation here with DeAndre Hopkins, Lamar Miller & a pretty darn good defense with JJ Watt not caring about these things called “injuries”.

Until I see otherwise, I have nothing positive to say about Da Bears. Fortunately, Chicago fans are too busy with the Cubs to worry about this nonsense. Texans roll.

A sexy pick to win the Super Bowl vs. a sexy pick to win the AFC South. The Packers winning the Super Bowl seems more likely because they have Aaron Rodgers. As much as we all love Blake Bortles, we’re not bumping him up to that level just yet. Could be a tight game here, I like the Packers to win but think the Jaguars can get within five points. Just close enough to keep hope alive.

Biggest spread on the board here, and it’s not surprising because it’s the Seahawks at home against Ryan Tannehill. Seattle got off to a slow start this year, but I think it’s going to take some time for Adam Gase to figure out the road to success with the Dolphin roster. Take the Seahawks even if 10 points sounds like a lot.

We got a pick ’em game right here because Vegas doesn’t know what to make of Dak Prescott or all the stuff the Giants did in the off-season. I do think Dak will be a good NFL quarterback someday, and this might be a good matchup for him to show it. But then again, maybe it isn’t because the Giants brought in a bunch of new defensive people and they can’t be worse than the guys they did have. I sympathize with Vegas here.

I’m taking the Giants. I think their passing game will benefit from the addition of Sterling Shepard & maybe even Victor Cruz if he’s playing. Those guys being out there creates more work for the secondary & means that Dallas can’t just put everybody on Odell Beckham. I think Prescott will be fine, but not good enough to keep up with Eli.

The good news for the Colts is that Andrew Luck is healthy this season. Well, actually he’s listed as questionable with a shoulder on the injury report, but I’m sure that’s nothing to worry about. What I would worry about if I were the Colts: Jim Bob Cooter. Ever since he took over the Detroit offense, Matthew Stafford has been on fire. They looked like a different team in the second half of 2015, and I think that continues into 2016.

Sure, Calvin Johnson is gone. That opens up opportunities for other guys. Stafford will have to throw the ball to somebody besides Megatron. The Colts aren’t exactly known for their defense and they didn’t do much to fix that in the off-season, so I think the Lions can keep it close in a high-scoring affair.

I have Arizona’s defense in a couple of fantasy leagues this season, and usually I’d be pretty worried about a Week 1 matchup with the Patriots. With Tom Brady not playing…eh, I’m ok with it. I know everybody’s saying Jimmy Garappolo is the next big thing, but I gotta see it in an actual game before I believe it. And there will be no better test than Pat P, Honey Badger & the rest of that dynamic Arizona secondary.

Six points is a lot to give, but I think the Cardinals will be looking to make a statement on SUNDAY NIGHT IS FOOTBALL NIGHT.

Man, could ESPN have found two more hateable teams to start out the MNF schedule? The Steelers are the Steelers, a bunch of dirty cheaters that are only loved by dirty cheaters. The Racial Slurs…well, that’s all we need to say about that. They were both in the playoffs last season though. Pittsburgh should be back without much trouble, and the way the NFC East goes, Washington could easily be back as well. Really, any of those teams could win that division and I wouldn’t be surprised.

I would love for Kirk Cousins to jump up and down after this game after beating Pittsburgh yelling YOU LIKE THAT at anybody in the vicinity. Antonio Brown’s going to face a very tough matchup in Josh Norman. Le’Veon Bell won’t be around due to suspension. Lots of things going against Pittsburgh here…so of course I’m taking the Steelers because that’s just how life goes. 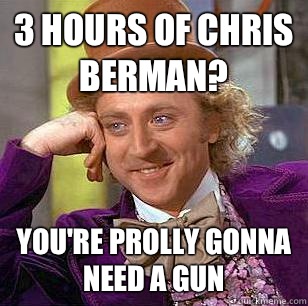 Your annual Chris Berman game! Good thing ESPN only gets one game a week usually. Most of us will probably sleep through this one and we won’t miss a heck of a lot. The 49ers should be absolutely dreadful. The Rams have some serious questions at quarterback (“Why did we mortgage our future for Jared Goff?” being chief among them), but other than that their roster isn’t too bad & Todd Gurley should be able to carry them to victory here.