Football has arrived. It’s finally here and you know what that means…..

There’s no reason for a long introduction or anything. You likely clicked on this because you wanted to see my prediction for the Dolphins, not to remind you that football season has arrived.

So without further ado…… 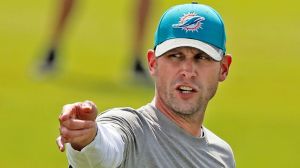 The Miami Dolphins haven’t been good in eight years. Think about that for a second. It’s almost been an entire decade since the Dolphins had a season that ended better than 8-8. That’s just plain ridiculous. Yes, I know the New England Patriots have been a dominant force in the AFC East for the last fifteen years, but the Dolphins need to be better. With new head coach Adam Gase in town, there is some hope in Miami that the Dolphins will once again be Super Bowl contenders soon. It’s not coming this season though.

On offense, the Dolphins are very average. Ryan Tannehill is a decent quarterback, but Miami needs him to be better than decent if they are going to unseat Tom Brady and the Patriots from the top of the division. Adam Gase is considered an offensive genius by many and if he can’t get Tannehill to take that next step, I don’t know if it’s going to happen. He’s got some good weapons to work with in Jarvis Landry, Kenny Stills, and DeVante Parker, so there’s no excuse that Tannehill can’t improve his game even more this season. The run game is a little weaker now that Lamar Miller is gone, but if Jay Ajayi and new addition Arian Foster can become a nice one-two punch, they may not miss Miller that much.

Defensively, I’m not a fan of what Miami is bringing to the table. There are maybe five or six starters that I would want on my team. The Dolphins traded with the Philadelphia Eagles this off-season to try and improve, but ended up getting Kiko Alonso and Byron Maxwell back. I got news for you guys. Maxwell still sucks and Alonso sucked so bad last year that I don’t know if he can return to playing the way he did in Buffalo before he was injured. Those improvements likely won’t pay off this year. The Dolphins do have good safeties and NDAMUKONG SUH and his fat contract, so they do have some pieces to work with. It’s just not nearly enough.

So, will this be the year the Dolphins return to prominence and make a playoff appearance for the first time in forever? No. They still aren’t very good and there’s no way they are taking out the Patriots, Jets, or the Bills this year. There is some good news for Dolphins fans to look forward to this season though. Like I said earlier, you REALLY want to see some improvement out of Ryan Tannehill under the guidance of Adam Gase. If that doesn’t happen, things could get extremely interesting this next off-season. The Dolphins could potentially be looking for a new franchise quarterback in Gase’s second year as head coach. You know what? I’m going to go ahead and bet on that happening……